How to Future Proof Your Infographic Strategy Ross Hudgens
-Include a natural image source link when your infographic is republished.

21 SEO Leaders Share Their Best SEO Career Advice SEOMoz
Lots of great career advice from top SEOs like Ian Lurie, John Doherty, Jonothon Colman (REI), Ann Smarty, and others. The author of this post did a great job putting it together. 😉

5 Reasons Why You Should Be Blogging Even If You Don’t Make Money Right Away
Blogging can provide great educational value by helping you learn new skills and deepen your knowledge on specific topics.

6 Link Building Tools to Boost Your Traffic Mashable
Key takeaways:
-Whitespark is a great low-cost option for small businesses.
-Ontolo is powerful but has a steep learning curve and requires skilled analysis.

How to Perform the World’s Greatest SEO Audit SEOMoz
Key takeaways:
-Subfolders pass linkjuice better to the main domain since subdomains are often considered to be a separate site by search engines.
-Avoid linking to spammy sites.
-The most important pages on your site should have the most internal links pointing to them.
-Too few no-follow inbound links will look suspicious to search engines.

11 Ways to Drive Gobs of Traffic To Your Website John Doherty
-Search might not always be the best way to drive traffic.

Local SEO Tips from Darren Shaw of Whitespark SEOBook
-Having a lot more reviews than competitors can help with local search rankings. Google has dialed back the importance of being located near the center of the city (known as centroid bias).

Here is an infographic that I helped put together:

Learn About My SEO Services

Feel free to republish the following photos that I took with a link back to this site for attribution.

One could argue that a negative aspect of the growth of corporations is that when you travel across the country you will likely see the same stores and restaurants. While this does provide a great service for people who prefer safe choices when dining or shopping in a foreign place, it means that there is less variety in the marketplace. We all know exactly what we will get when we visit an Applebees or Starbucks in a different town, but we may be adverse to taking a risk with a restaurant we have never heard of.

That is where online reviews can save the day. Online reviews provide transparency of information and you can instantly make an accurate estimation of an establishment’s quality because you can see how satisfied other people have been in the past. This can significantly mitigate the risk of trying an unknown restaurant and if there are enough reviews you can have a high level of certainty about what you should expect. This information makes people less reliant on brands like Applebees which they have come to like and trust, and puts power back in the hands of mom and pops. You can contribute to saving the mom and pop business by writing local reviews to share your experience whenever you can.

Here are some of the advanced search operators that I find most helpful when working on SEO.

Searches for a keyword on a specific site.

The star acts as wildcard for your query.

Searches for pages with the keywords in the title tags.

Searches for pages with the keywords in the URL.

Searches for the exact use of the phrase.

Why Google Is Not Going Away All Things D

The Noob Guide to Linkbuilding SEOMoz

What Type of Links Should We Be Getting Point Blank SEO

Key takeaway: Move the brand name to the end of the title tag.

Penguins, Pandas, and Panic at the Zoo SEOMoz

Great talk by Susan Cain on the power of introverts.

5 Must Read Books on Content Marketing and Strategy Sparkplug Digital

This is a hilarious video made by Dollar Shave Club which has generated over 4 million views since it was uploaded on March 5th! Hat tip to Rand Fishkin who shared this in a presentation at a Hackers & Founders London event.

Takeaways
-“Videos are 53 times more likely than text pages to appear on the first page of search results” -Forrester
-Thousands of hours of video show shoppers tend to turn right after entering a store. -The Power of Habit

Cool Tools
MyBlogGuest – My go-to place to finding quality sites for publishing guest articles and articles to publish on my own site (there is a wide range in quality of the articles available).

What I’m Reading
The Power of Habit by Charles Duhigg
Catching Fire by Suzanne Collins
In the Plex by Steven Levy
21: Bringing Down the House by Ben Mezrich

Infographic by Seametrics, a manufacturer of water flow meter technology that measures and conserves water.

Here are a few of my favorite links from February 2012 (because we should reward great content by linking to it).

5 Ways to Build Links by Lending a Hand – Great post by Kane Jamison on earning links by being helpful.

Inbound.org – a brand new site that features articles on inbound marketing that can be voted up by the community.

Live Life in Permanent Beta (video) – A good talk at Stanford by Reid Hoffman on the idea that we are all entrepreneurs of our own careers.

What I’m Reading
The Startup of You – by Reid Hoffman

Russell Wilson is an incredibly inspiring individual who we are lucky to have in Seattle. Numerous “experts” said he couldn’t be successful in the NFL because he was too short. The Pro Football Weekly 2012 Draft report on Russell Wilson stated “He has the arm, legs & smarts to grow into an effective backup.” However he believed in himself and through incredible drive and work ethic, he has become one of the best quarterbacks in the NFL and has won more games in his first two years than any other quarterback in history. 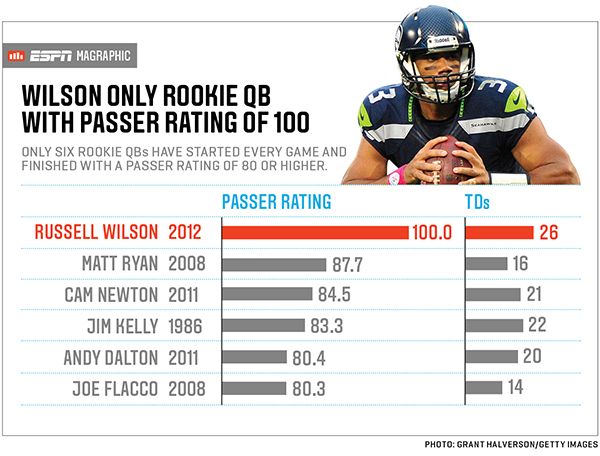 “By now, the stories of his work ethic and drive have entered a near hyperbolic status.

At Wisconsin, he carried a ring of note cards so when he had five minutes before an interview, he could study plays. When he talked with former NFL coach Jon Gruden on ESPN before the draft, he said he arrived at Wisconsin on July 1 and expected to learn the Badgers’ offense by July 21. “You know what?” former offensive coordinator Paul Chryst says. “He did.”

After an exhibition game at Kansas City last year, the Seahawks returned to the team’s facility in Renton in the early morning. While most players quickly headed for their cars, Wilson studied film for a couple hours as the equipment staff toiled away.”

“One of Wilson’s favorite sayings during the season was ‘the separation is in the preparation’ and judging by his actions on Monday, Wilson is already trying to separate himself for next season. He developed a reputation during his rookie season for how detailed he was in his preparation. Following games, Wilson would watch film of the next opponent and would place notes in the wide receivers’ lockers on Monday morning.”

“Every day my goal is, can I be better than I was yesterday?” –Russell Wilson

“Seattle, you have something special in Russell Wilson. His recipe is simple: Hard work, respect, loyalty, a responsibility to others, and a seemingly unshakable faith. It’s not flashy, but it’s effective. I understand Russell and his wife, Ashton, make weekly visits to Seattle Children’s Hospital. That genuine love for others pours out of Russell Wilson. He’s not there out of obligation. He’s there because that’s the type of person he is. There is no pretense. There is no front.”

“There’s little time for rest – Wilson gets by on five-or-six hours per night.

‘I train my body not to get much sleep; that way I can still be kind of aware during the week. I’m not suggesting people do it,’ he says. ‘And come game day, I’m just amped up. My body is more awake and aware and my instincts are really alive, so I think it helps me.'”

My team at Sparkplug Digital recently developed an infographic that provides actionable tips for conducting a self-check of your SEO strategy.